In a mobile application, there may be a need to send some information, warnings or guidance to the end-users in the app. One way to do this is sending in-app announcements to the users.

What is an In-App Announcement?

In-app announcements are the messages that are sent to the end-users to inform them about something important, notify them about their actions or guide them to somewhere.

These announcements help developers to communicate with users without updating any code or publishing a new release of the app.

In our case, we will implement a solution to announce messages that are needed to be read by users just once. This implementation can be used for some purposes such as:

For this purpose, a sorted set in Redis is exactly the thing that we need. It helps keeping track of the announcements by storing and sorting them by their versions.

A sorted set is a sorted data type which is in the format like a map where key is the string message and value is the score assigned to the string message. It is sorted by scores, which correspond to the versions of our announcements in our case.

As the very first step, we need to create an Upstash database console.

Then, we can start filling out our serverless Redis with announcements. Since I like to automate everything by coding, I prefer to add new announcements by writing a Python script.

At first, I need to configure my Upstash Redis in my Python script:

Then, I can add my new message to Redis by getting the latest version from my database and add new message in the following format:

Thanks to the new feature on the Upstash console, we can display our data and visualize it in the “Data Browser” section on the console.

That’s how we can add new announcements to our sorted set.

Of course, this is just one way to add a new announcement. If anyone is comfortable using the console directly ( https://console.upstash.com/ ), then it can be used as well.

Connecting the App to the Serverless Redis

In this demonstration, the main aim is to create an announcement control by directly connecting end-users to the Redis without the need for any backend service that connects users with announcements in the database.

To be able to read announcements in Redis from mobile apps, we are able to get read-only token from the Upstash console.

Now, we can move on to the React Native for mobile application. To get more information about React Native, please visit react native .

To start using React Native for the first time, please follow the steps in environment setup .

Since we just need to show how to implement one of the ways of in-app announcements, we will design only one screen that displays the new message as an alert, if a new message exists.

On the screen, we need to check whether a new message exists or not by sending an HTTP request to Redis by using the read-only token. To do this, we need to store the latest version retrieved from Redis in the past.

We can use react-native-encrypted-storage as the local storage in React Native.

Everytime the user opens this screen, we need to get the latest message which has a version higher than the stored version in the local storage of the mobile phone.

Using ZRANGEBYSCORE from +inf to the version that is stored in local by limiting the results to just one result can be a solution to our problem. For more detailed information about Redis commands can be found at Redis commands.

The next code segment implements the following steps in React Native:

At the end, we can display the latest announcement as an alert and synchronize the local version to the latest version in Redis. 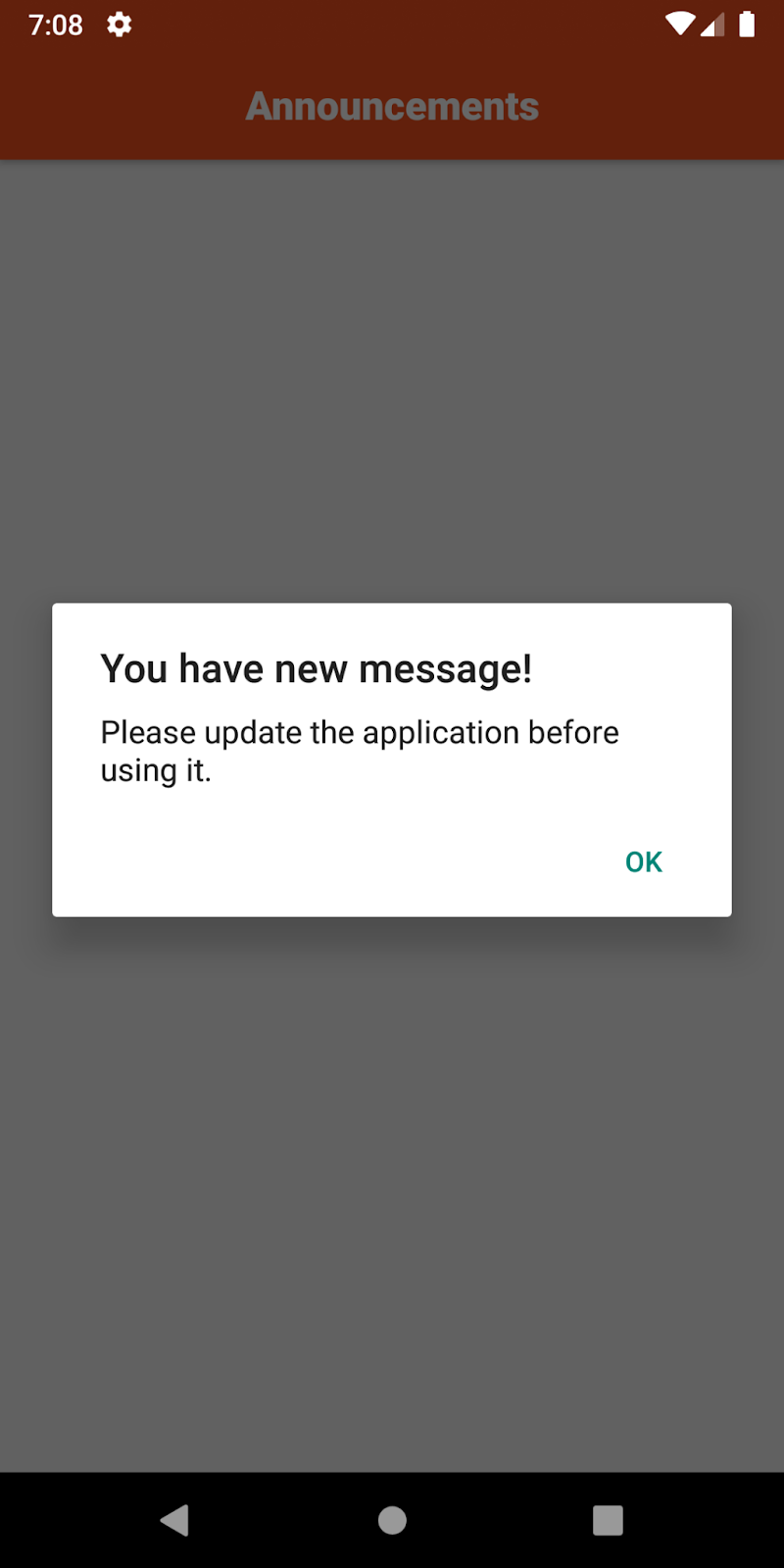 Complete source code of this simple application is available on github.

In this post, we developed an in-app announcement system, which is sending a new message to users just once if a new message exists.

The user receives the latest announcement that the user hasn’t seen yet. Then the version of the received message is stored in local storage. Every time the user opens the screen, the application checks whether there is a new message in Redis or not.

This solution can be implemented without any backend service by directly connecting from mobile app to Upstash Redis via read-only token.

I hope this post helps you to communicate with users in an easy way.